: to waste or pine away: languish

Between the words in old sagas, between the rhyme and meter, I sense a presence—the words not said, the gods not named. I imagine these characters, the unspoken ones. One of them is called Dwine. In the world of mythology there is balance, what is lost in one place is found somewhere else. As the warrior diminishes, something else grows. His name is like the sound of bare branches in the wind. The second half of life is his domain. The force and wrath and strength of the young, that drains away as time passes goes somewhere. It goes into Dwine.

Germanic peoples during the migration period carried elaborate swords with pattern welded blades and bright ornamented scabbards and hilts. They also carried big knives, which grew larger over the period. These were brutal unlovely things; the blades had a strange looking humped back with a straight edge. Archeologists call this family of knives seaxes, after the Germanic word for ‘knife’.

Swords embody a world of stories, of dragon slayers, leaders, and noblemen whose ancestors are gods and kings. The knife has a different story and like the gods I imagine, it is untold. It’s an implied story, unlovely as the blades themselves. The characters are common folk, not descended from kings, yet their story is older. The seax cut hearth wood and slave-taker, it protected crops not castle walls. The gnarled-handed people who held these knives called on names that weren’t recorded. 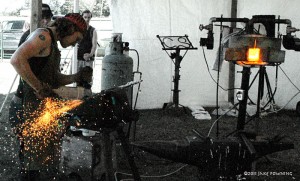 I forged the blade for this Seax as a demonstration at a smith’s moot called CanIron VIII with help striking from my friend and fellow swordsmith Jeff Helmes.

The blade is constructed from five strands, the four spine strands are nine twisted layers each and the edge bar is 700 layers of folded steel.

I’ve been exploring seax hilts on paper for years. It’s a challenging form to design with few examples of intact hilts. Petr Floriánek has been doing allot of work in exploring ancient Germanic aesthetics, especially as it relates to the seax. His work has inspired me to look deeper into this form.

I decided to follow my sense of the grimness of these blades. I chose oak for the grip and leather for the sheath. Oak has commonness; it’s the wood of the spade handle, the door lintel. It’s a peasant wood with roots in the oldest myths. It’s the wood of Thor and Taranus and Zeus— lightning gods and unpredictable protectors.

Blank faces look out from the ferules, turning away from the centerline of the knife to be clothed in expression along the edge and spine, where the blade speaks its knife language.

The sheath is woven with dream creatures, neither man nor beast, twisting in and out of sense.

The grip is carved from oak with skeletal beaked serpents.

I carve the fittings from wax and cast them into bronze. 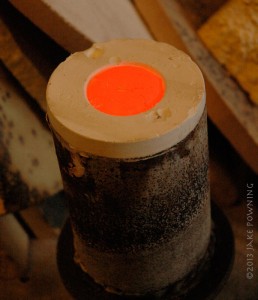 Finally I assemble the parts, capture the light they reflected yesterday and collect words together, try to describe what I was doing, what the grim faces mean, but this story is not told in words. 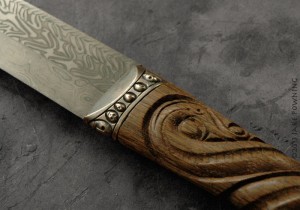 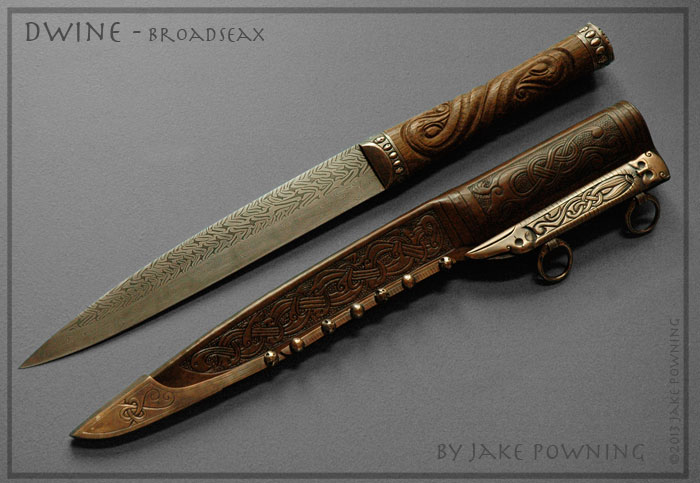 “One look in his eye

ever having met him.”