The sun flares red across the landing strip, casting its long fingers down above mountains as I board my midnight flight leaving Anchorage, Alaska. On the 25th of May I arrived in the same airport in late afternoon. I had slept through much of the flight and woke to see rumpled mountains and snow. The landscape looked like a blanket thrown on the ground in a hurry, all peaks and shadows.
This was our second gathering. Swordsmith Dave Stephens, our host and the force behind Arctic Fire, had the idea to make an artifact that would be hidden somewhere in the world. The object would be created by a group of smiths, from Britain, Canada, the Czech Republic, Sweden, and the United States. We chose a piece with an obscure name from myth or fiction or history, to be created from start to finish over four days.

My concept drawing next to Peter Johnsson’s geometrical design blueprint.

Once we decided on a blade and its provenance, we worked out a design and researched ornamentation. Master swordsmith Peter Johnsson of Sweden used his geometrical design technique to make a finished blueprint and I made a drawing of the blade showing its ornamentation. To create this project in such limited time we would need exact measurements and blade blanks to simultaneously construct the hilt, scabbard, and blade. To make things more interesting (and much more difficult) we decided to make the blade material from smelted iron ore in an Iron Age smelter. We added two days to the project.

We spent the first day collecting materials and building the smelter from dung and straw and clay under the supervision of master smelter and swordsmith Owen Bush from the UK.

The smelter in full flame around 2AM.

We kneaded clay spheres until our hands ached, then stacked them and grouted them into a cylindrical chimney called a smelter. We lit a fire in the chimney. As the clay dried we sculpted a face on the smelter, a homunculus watching over our work. Soon, charcoal and ore were added to the fire— flames waved like red and orange-yellow silk banners in the late arctic sunlight. Slowly the sun approached the horizon. The drift of ore diminished as we measured it into cups and fed it in the hungry chimney. Flames appeared to effervesce with yellow lines of charcoal.

As the dusk of summer night in Alaska descended, it was time to break open the smelter and retrieve the bloom. The ore had sintered down into a semi-homogenous mass at the bottom of the smelter chimney. Owen broke open the side and gripped the bloom with tongs J. Arthur Loose had just forged. I helped shovel the hot cinders away from the broken side of the smelter and Owen wrestled the bloom out. “It’s a boy!” cried Peter Johnsson as the fulgent iron thing emerged.  We struck at it with hammers breaking the slag from the iron. Then Owen flattened it. By the time we had the bloom we had been working on the project for at least sixteen hours. Time blurred, the summer night in the arctic is deceptive, it never quite reaches full dark. We had the first essential ingredient for our sword— iron.

Owen Bush breaks open the smelter to reveal the bloom. 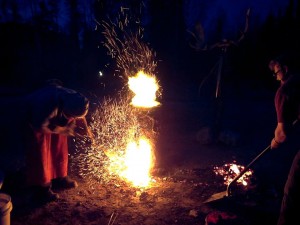 Petr Florianek and I shovel hot charcoal cinders away as Owen Bush wrestles the bloom.

Flattening the bloom in a hydraulic press.

The bloom after being forged down a bit.

Over the next day Owen and Michael Pikula forged and folded the bloom, refining it into a material that a blade could be made from. In the kitchen, the rest of us stooped over velum designing the scabbard.

By the end of the second day we had a plan for the scabbard and the material to make the blade.

The level of intensity of the next days is something I’ve only experienced previously in living through deaths and births— the anticipation, the joy and grief, the holding oneself together, and the exhaustion.  For a period of each day we were filmed and livestreamed on the internet, but we started long before the cameras and worked long after they stopped filming.  On day four the first blade failed due to a welding flaw.

Dave Stephens forging the core for the backup blade.

Dave Stephens forged a pattern welded backup blade from conventional steel with a hairpin core to make sure we had a blade by the end of the project. He was still hammering at 2 am.

Half way through day four the waxes are ready to be sprued and invested.

Peter Johnsson and I worked until three in the morning that night investing the wax hilt components I had carved to be cast into bronze, then placing the molds in the burnout kiln once they were set. Over the previous two days I had put twenty three hours into constructing the wax fittings for the hilt, carving them and fitting them to the blade.

The next morning, on the fifth day, Owen began the second bloomery iron blade, stacking the pieces of the first blade into a fresh billet and forge-welding it. Peter had constructed the scabbard and glued a leather skin over it. J. Arthur constructed sheet metal fittings while Petr Florianek carved an antler slide and shaped and ornamented the grip components from antler. 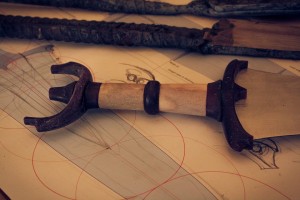 The waxes assembled on the blade blank with Petr’s antler hilt components.

Hammers thumped, grinders threw streams of sparks, Petr’s fingers were yellow white with antler dust. My jeweler’s saw made high ratcheting sounds as I cut out sheet metal forms for the sheath.
With the pace of the work the energy level was very high. Between carving and fitting and designing, Petr and I took time to be ridiculous for the camera. I sat on his shoulders as we carved fittings and we had several sparring duels with elk antlers while singing made up songs.

J.Arthur Loose at his desk, cutting out scabbard parts from sheet bronze.

By the late afternoon of day five we were ready to cast the fittings. Owen was well on his way with the new blade, but if the casting were to fail it was hard to imagine how we would recover in time to complete the project within the time limit.

Lost wax casting is always tense, because you destroy your model in order to create the mold, but in another person’s studio with unfamiliar equipment and with the finish deadline for the entire project one day away, there was palpable pressure. I rehearsed the motions of removing the mold from the kiln, pouring the crucible. Then it was time.

My face is burning!

I opened the kiln door, removed the mold, and poured the molten bronze into the sprue hole. The chrysanthemum liquid arced down into the opening then began boiling and spitting as soon as it entered the mold. Everything else was as it should be, but this was not normal. I felt my stomach contract— this could mean disaster. When the bronze was cool enough I took the mold to the sink and quenched it. The roiling bubble of hot investment hitting cold water rose and then fell and I submerged my hand in the milky bubbling water. I felt the warm bronze, the sprue cap felt bumpy and coarse. As I drew it out I saw that the top portion of the upper guard had not filled and a huge gas bubble had displaced the bronze so that the small beast head looked like it had been shot in the face. The upper guard was ruined. I had similar results from the next mold.
We took a break, jet lag, disappointment and exhaustion beating down on us like a black sun. Deciding there must be gas in the molds from an incomplete burnout caused by the kiln ceiling being too low, I repeated the burnout and managed to salvage the next castings by midnight. By the end of the fifth day we had a blade, a guard, ferrules and grips, and a scabbard with almost all its parts, but no pommel.
This kind of challenge is an important part of any craft that relies on the vagaries of reality. It’s not the failure that matters but how we react to it— failure is a constant, it’s part of the process.
The sixth day was a mad but increasingly jubilant rush as we began to realize that we would complete the project despite the failures. I polished and patinaed bronzes, J. Arthur set garnets and moonstones, Michael fabricated a rivet block, while Dave polished scabbard parts and narrated for the cameras. Petr did an amazing amount of carving, replacing the missing hilt parts with antler. 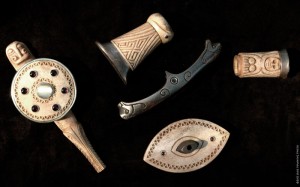 My bronzes with Petr’s antler carvings and J.Arthur’s garnets and moonstone set in silver bezels.

Petr and I hammer a shim to hold the guard in place before the final hilt assembly.

Checking to make sure we have the pommel the right way round.

Owen ground the blade to fit exactly in the already constructed hilt and scabbard, a feat which required precision within a fraction of a millimeter.Peter Johnsson was the architect of all this, problem solving and making sure that we sailed through the storms and came to a safe harbour.

By the end of the day we had glued the hilt and hammered the tang rivet so the blade was complete. The scabbard was glued and pinned and we had a finished artifact. It was hard to believe. Being solitary craftsmen and artists it was never sure how we would work together. In the end we became like a single craftsman with many bodies and we did what we set out to do.

Within a day of completion we were all back in the air speeding away towards our different corners of the earth to sleep and recover and see how the experience had changed each of us.

Our part of the story is done, but there is a story in the artifact, and clues in its making. Maybe someone reading this will read the story written in antler and bronze and iron and clay, and guess its name. If you think you know the name of this sword and where in the world it is hidden, send  your guess to Jake Powning and you could win a trip for two to claim the blade. For more information go to ArcticFire2013.com

Special thanks to Shane Harvey, Van Clifton, and the entire Stephens clan for their tireless work and good humour. Having swordsmiths come and stay in your house for a week must be a rather harrowing experience! Also thanks to the great work of the camera crew, Tessa and Bianca Clifton, and Hunter Lottsfeldt.

Photo credits: some of the above photos were shot by Bianca Clifton, Peter Johnsson, and Devan Stephens.